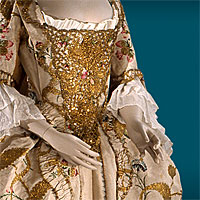 The Margaret Hunter Shop on Duke of Gloucester Street.

A gentleman has his shirt cuff adjusted in the Margaret Hunter Shop.

Ladies enjoy a cup of tea while examining the latest goods at the Millinery Shop.

In the 18th century, millinery shops were almost always owned by women. From fabric sold in the shop, milliners would make items such as:

In addition to being a trades woman who made fashion accessories, the milliner was also a businesswoman who sold a wide range of fashionable imported goods. It was not uncommon for a milliner in the colonies to advertise that she had just imported from London the very latest in mercery, haberdashery, jewelry, hosiery, shoes "and other items too tedious to mention."

The other primary 18th-centurywoman's trade was that of mantua making – or gown making. On occasion, the apprenticeship for milliners also included learning the skills of mantua making. Independent of a millinery shop, the gown maker was on par with the tailor – both were skilled in cutting, fitting, and sewing but usually were not able to sell fabric to their customers. In the 18th century, fabric accounted for the largest part of the cost of clothing.

Today at Colonial Williamsburg's Margaret Hunter Shop, interpreters portray the millinery business with changing 18th-century fashions, their importance in colonial society, and the economics of importing. In addition, interpreters practice using the accurate trade methods and technologies appropriate to the various trades of millinery, mantua making, tailoring, and stay making.

Milliners sewed and sold – among other things – cloaks, mantles, hats, hoods, caps, gloves, petticoats, hoops, riding costumes, and dresses for masquerades – all in the latest fashion.

"In a word, they furnish everything to the Ladies that can contribute to set off their Beauty, increase their Vanity, or render them ridiculous."