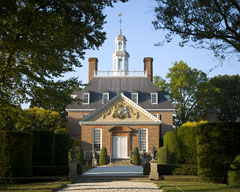 Colonial Williamsburg's restored, 18th-century historic area is where almost a million visitors from all over the world come each year. Our historic city is more than a mile long and has 88 original public buildings, 50 major rebuilt buildings, and 90 acres of gardens and greens restored to their colonial appearance. We are a living history museum dedicated to the origins of the idea of America before there was a United States of America.

Williamsburg, Virginia, was the colonial capital of the largest, wealthiest, and most populous outpost of the British Empire in North America. Here the ideas of liberty and equality, of representative government, of justice, and of the rights and the responsibilities of individuals within a society were conceived decades before the United States of America was born. We hope that by visiting us either on the Internet or in person you will better understand the democratic and republican principles expressed eloquently in Thomas Jefferson’s Declaration of Independence as “…life, liberty, and the pursuit of happiness.”

Williamsburg played an important role in the history of colonial America. From 1699 to 1780, it was the capital of royal British colony of Virginia. After May 1776, Williamsburg was capital of the newly independent Commonwealth of Virginia, the political, social, economic, and cultural center of a vast empire that extended from the Atlantic Ocean to the Great Lakes. It was the political and ideological training ground for many of the leaders in the struggle for the American colonies independence from Great Britain. Read about

The birth of American liberty 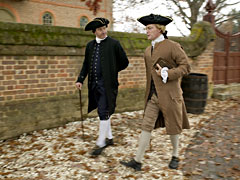 On May 15, 1776, Virginians meeting at the Capitol passed the Virginia Resolution for Independence. This historic document declared the colony’s independence from Great Britain and instructed its delegates to the Continental Congress, meeting in Philadelphia, to propose the independence of all 13 colonies. Delegate Richard Henry Lee made that motion on June 7, and the Declaration of Independence, written by Thomas Jefferson, was adopted on July 4, 1776. 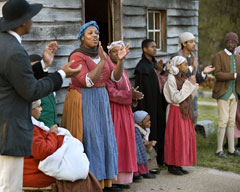 We hope you will discover more about the experience of colonial America by exploring our websiite. You can access other pages of the site through the links as indicated. Please note that other areas of our website are in English.

In History & Education you will meet some of the 18th-century residents of Williamsburg and learn more about the early “idea” of America. You also will find information about our museum, the collections of fine and decorative artwork, libraries, gardens, special study programs, and educational resources.

Read about Colonial Williamsburg’s mission and restoration of this historic city by John D. Rockefeller, Jr. in About Us. Also, you will find information about employment and contributions to the museum. We are a private, not-for-profit foundation dependent upon the financial support of donors and income from ticket sales. We do not receive funding from federal, state, or local governments.

Our magazine, books, videotapes, audiotapes, and CDs are presented in the Publications section. You may purchase Colonial Williamsburg products online in the Shop section.

We hope you will plan a trip to experience Colonial Williamsburg in Williamsburg, Virginia, U.S.A. Please see the Visit section to learn about the experiences you may have in our Historic Area, or about our lodging, shopping, and dining opportunities.

Colonial Williamsburg invites you to experience colonial America and learn about the struggle for freedom more than 200 years ago. These ideas of liberty and equality born here are for all people, for all time. We hope you will enjoy your visit to America’s past.