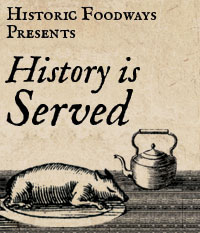 Visit the History is Served blog and cook along with the Historic Foodways staff, send your comments and questions, and enjoy a taste of history. Explore

Members of the Historic Foodways department prepare food in the kitchen of the Governor's Palace.

Light and cooling breezes enter through the kitchen window at the Governor's Palace.

Fresh oysters are shucked in the Governor's Palace Kitchen.

Eggs are art at the Governor's Palace Kitchen.

Dining is social in colonial era

Food played a very important part in the social lives of 18th-century Virginians. Aside from providing basic sustenance, dining was also one of the most important ways that colonial Virginians exchanged information. The dining process might last for two hours in some upper-class households. It wasn't unusual for a conversation that began at a dinner table to continue well into the night. The taverns of Williamsburg also provided the food, drink, and atmosphere the helped propel the American Revolution. On numerous occasions, the Burgesses retired to one of Williamsburg’s many taverns to continue their political discussions with food and drink.

The foods and preparation techniques used by colonial Virginians varied depending upon the wealth and social standing of the citizenry. Meals at the Governor’s Palace served those at the pinnacle of social standing. The last two Royal governors employed professionally trained European cooks. Known as "principal cooks," these men were the highest paid servants on the property. They served an apprenticeship in Europe and had a level of training and skill unmatched in Virginia. The Governor was able to provide these cooks with the best-equipped kitchen in the colony. The governor’s cuisine reflected the French influence popular among upper class English society.

The household inventory for Governor Botetourt listed copper pots, a spit jack, and an eight-day clock. Based upon the inventory, The Colonial Williamsburg Foundation added a charcoal-burning stew stove to the Palace kitchen in 1994.

The Virginia gentry were next in wealth and status. They demonstrated their social standing by providing a wide variety of meats and sweets at each meal prepared in a more traditional English fashion. The Virginia gentry employed slave cooks who were less formally trained than the governor's cooks, but they were extremely skilled nonetheless. Highly skilled cooks were expensive and prized possessions. One slave cook who was known for her skill was Lydia Broadnax, who developed her reputation cooking for the Wythe family for many years and was eventually granted her freedom.

Next in social standing in the 18th century were the middling class, who were less able to provide the variety and choices that the gentry could. They probably emulated the gentry when entertaining but ate more basic foods on a daily basis. The upper middling classes may have employed slave cooks, while the less well-off relied on the cooking talents of the mistress of the house.

Most colonial Virginians fell into the bottom rung of the social ladder. The poor were very limited in cooking equipment, often having only one cast iron pot. The wife of the house prepared basic soups and grain porridges. The most common type was hominy, made from corn, often flavored with salt-cured pork and vegetables. This basic diet was supplemented with whatever meats and vegetables they could obtain.

Foodways works with chefs at the taverns and the Williamsburg Lodge to help incorporate 18th-century recipes and terminology into modern restaurant menus so guests can experience the flavors of the past.