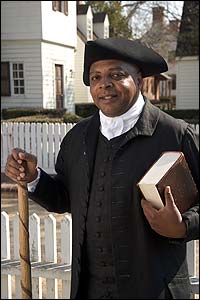 Gowan Pamphlet answered a call that set him on a path few would have imagined possible for an enslaved person in the colonial Chesapeake region. Enmeshed in the slave society of 18th-century Virginia, he was hemmed in by law and custom, by his owners’ demands, and by fear and prejudice harbored by slaveholding and non-slaveholding Virginians alike.

When Gowan began his preaching mission in the 1770s, he was the property of Mrs. Jane Vobe, owner of the King’s Arms Tavern in Williamsburg. Some of the widow Vobe’s slaves – Gowan possibly among them – learned to read the Bible and took part in formal Church of England services at Bruton Parish Church. Under Vobe’s watchful eye, Gowan and his fellow tavern workers (enslaved and free) also became skilled in the manners, etiquette, and services that genteel diners and travelers expected. Before the Revolution, Vobe catered to the likes of William Byrd III, Sir Peyton Skipwith, and George Washington. On the eve of the siege at Yorktown in 1781, Continental officers stationed in Williamsburg, including General Thomas Nelson Jr. and Baron von Steuben, had accounts with Vobe for lodgings and meals. It was during this demanding time for businesswoman Vobe that Pamphlet began his preaching mission, and the future of his growing congregation depended in part upon his ability to negotiate for time away from the tavern.

Called to be a preacher

Inspired by the preaching of an itinerant black preacher named Moses, Pamphlet stepped in when Moses left town. Both men had responded to the “good news” abroad in Virginia in the 1760s and 1770s spread by evangelical Presbyterians, Baptists, and Methodists. The message of equality before God was on the lips of black preachers and in the hearts of many black Virginians. Always quick to associate slave religion with rebellion, local authorities ordered Moses whipped under Virginia laws that authorized slave patrols for breaking up slave gatherings and up to 39 lashes for anyone caught meeting clandestinely with slaves.

Oral tradition suggests that Pamphlet, like his predecessor Moses, carried on his early ministry in arbors fashioned from saplings and underbrush on Green Spring Plantation several miles from Williamsburg, far from the sight of slave owners and patrollers. His popularity among the enslaved population likely prompted assaults on his reputation and inspired his calling, too. In July 1779, a white resident of Yorktown used the pages of the Virginia Gazette to accuse Vobe’s slave of theft. And, in spite of the good will that was thought to have existed among early black and white Baptist converts in Virginia, a regional Baptist organization temporarily excluded Pamphlet from the Baptist fold having decided that “no person of color should be allowed to preach.” Undaunted, Pamphlet and his followers continued to meet and grew in number. By 1781, the congregation counted 200 members and may have begun gathering for worship on the outskirts of Williamsburg in a wooded area known as Raccoon Chase south of Jamestown Road.

Official recognition for his church

After the capital of Virginia moved to Richmond in 1780, Gowan and the rest of Jane Vobe’s tavern staff continued to live and work in Williamsburg. By 1786, a dwindling residential population and fewer visitors in the former capital prompted Vobe to move her business to Chesterfield County across the James River from Richmond. Pamphlet came back to Williamsburg in 1791 with his new owner, David Miller, executor of Vobe’s estate. With his congregation numbering around 500, the visionary pastor judged it was time to apply for membership in the white-run Dover Baptist Association – a regional organization descended from the very group that earlier tried to silence him.

Pamphlet – still a slave and probably with a pass from Miller in his pocket – traveled north across the York River to Mathews County to attend the annual meeting of the Dover Association in October 1791. Near the end of the two-year inspection period for candidate churches, events near Pamphlet’s home base nearly derailed the application and brought down the law on Pamphlet himself. In August 1793, William Nelson Jr. claimed that “the black preacher Gawin” inadvertently dropped a letter in the street in Yorktown on his way to Norfolk. The letter’s shocking contents persuaded Nelson that Pamphlet was a messenger for a network of armed slaves from Richmond to Charleston, South Carolina. Pamphlet laid low for several weeks until the trouble subsided.

In September 1793, within a month of the talk of conspiracy involving his slave, David Miller drew up a deed that would set Pamphlet free. In October, Pamphlet attended the annual meeting in Middlesex County to hear the Dover Association announce that the “Baptist church of black people at Williamsburg” was received into membership. In December 1793, York County officials ordered Miller’s deed copied into the public record.

Until his death in 1807, Pamphlet continued – now a free man – as pastor of the only Baptist church in Williamsburg, annually traveling miles from his home to represent his African American congregation at meetings of the Dover Baptist Association. Late in Pamphlet’s ministry, Jesse Coles invited the congregation of black Baptists to hold services in Williamsburg proper in a wooden carriage house on Nassau Street. In 1805, white resident James Semple reported with unease that “On Sundays & Holidays the number of Free negroes & Mulattoes as well as slaves that is seen in the City is truly astonishing.” 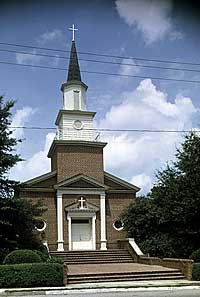 Gowan Pamphlet owned part of a lot in Williamsburg and another 14 acres in James City County, just two miles from downtown. A solitary figure, no evidence of family connections has come to light, and Benjamin White, a free black, administered his estate. Free blacks Israel Camp, Benjamin White Jr., John Dipper, and others led Pamphlet’s congregation in the years that followed his death. White Baptists did not organize a church in Williamsburg until 1828.

The African Church, as it was known in the late 1820s, was tested during the antebellum period. Closed for a year after the 1831 Nat Turner rebellion in Southampton County, badly damaged by a tornado in 1834, and forced to accept “reorganization” in 1843 with its own black preachers subordinate to white ministers, the congregation nevertheless took possession of a new brick church dedicated in 1856 that stood on Nassau Street for more than 100 years. Returned to black leadership after the Civil War, the historic congregation took the name First Baptist Church. Newly freed citizens of the United States in the Williamsburg area turned to this distinguished African American church for spiritual, civic, and educational support, and during Reconstruction, the Rev. John M. Dawson won election to the Virginia General Assembly and served in the Williamsburg city government. First Baptist Church moved to its current location on Scotland Street in 1957. The congregation honors the memory of its founder Gowan Pamphlet to this day.